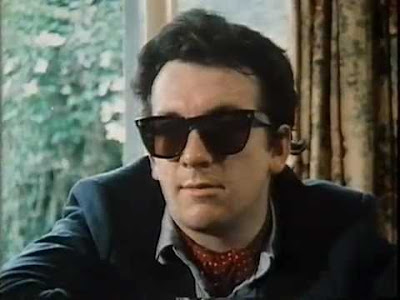 Synopsis: The video above is a serious must-watch for fans of Elvis Costello’s polarizing 1981 country covers album Almost Blue. It’s a 31-year-old episode of the UK's ITV's South Bank Show, and it chronicles Costello as he cuts the record in Nashville’s famed Columbia Studio B with Billy Sherrill.

The episode, or more documentary, directed by Peter Carr, provides an intimate look behind the scenes of a cocksure Costello, biting at the ankles of country music as a chain-smoking, speedboat-skippering, ever-bearish-but-professorial Sherrill humbles and disarms the smart-alecky Costello with his dry wit and first-hand knowledge of something the singer still obviously knew in concept only. The doc also gives snapshot after snapshot of a radically different Nashville and the Music Row circa 1981, along with Costello’s commentary on the city.